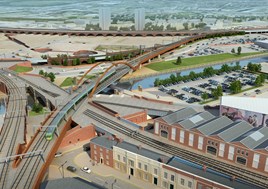 The Court of Appeal has dismissed a legal challenge to the construction of the Ordsall Chord in Manchester.

The challenge was made by Mark Whitby, former president of the Institute of Civil Engineers.

The decision was made on March 23 by Simon LJ (sitting with Lindblom and Hamblen LJJ) in the Court of Appeal in London.

The court dismissed all three appeals made by Whitby against the decision in the Planning Court: two statutory challenges of the Transport and Works Act order and of the Listed Building Consent, and a judicial review of the planning permission. The Court of Appeal will hand down its judgement early in the new term, after Easter.