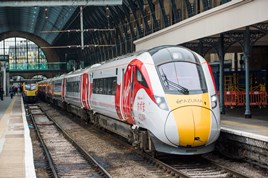 Virgin Trains East Coast (VTEC) launched its Class 800 train at London King’s Cross on March 18, rebranding them as ‘Azuma’ – which translates as ‘East’ from Japanese.

They will enter traffic from 2018, with Virgin Group founder Sir Richard Branson calling them the UK’s most advanced long-distance train.

Branson said that the trains would run at 140mph, but did not give a date when this would happen. Network Rail spokesman Toby Higgins told RAIL that that was subject to overhead line upgrades and the closure of level crossings.