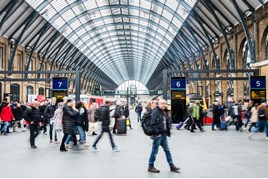 That proportion (71%) was supplemented by 26% of the funding from Government. Property provided 3%.

Figures released by the Office of Rail and Road on March 11 reveal that after adjusting for payments within the industry, the overall cost of running the railway was £13.6bn - with 54% of these costs incurred on train operations and 46% on rail infrastructure.

ORR said the increase in passenger contribution is primarily through a 4% increase in the number of passenger journeys made, and because of 1% fare increases in real terms. It said most of these were in London and the South East. Total fare income was 62% unregulated fares and 38% regulated fares.

Government funding reduced by 9%, from £3.9bn to £3.5bn. ORR said this included funding from all government sources including devolved administrations and Passenger Transport Executives. After adjustments for the finance costs paid by Network Rail to the DfT, government funding has reduced by 14% to £3.1bn.