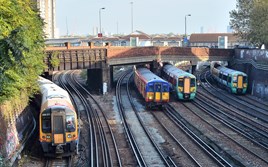 Chancellor of the Exchequer George Osborne made the announcement in his Budget on March 16. The government expects TfL to match its contribution.

The railway will serve central London via an underground tunnel between Wimbledon and Tottenham Hale and New Southgate, connecting to routes in Surrey and Hertfordshire. It is expected to cost £32.6 billion. There is potential for 30 trains per hour and the route would increase London’s rail network capacity by 10%.

The announcement means that construction can begin early in the next decade, with trains running from 2033. The Budget recommended submitting a hybrid bill by autumn 2019.

Osborne said: “With the difficulties we see in the global economy, we’ve got to make Britain fit for the future.

“Now is the time us to make the bold decisions and the big investments that will help us to lead the world in infrastructure, and create jobs, push up living standards and boost our productivity for the next generation.”

“We know that good transport doesn’t just help get people around, it helps them get on. The National Infrastructure Commission (NIC) has rightly identified these projects as transformational schemes that have the potential to further strengthen our economy. This is a major step forward for Londoners.”