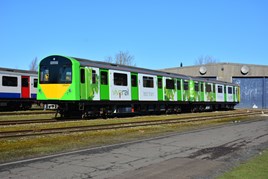 VivaRail's D78 stock conversion has taken another step forward, as prototype unit 230001 has now been formed into a two-car unit, when a second vehicle was added in January, and a middle trailer car is now being converted at Long Marston.
The train, 230001, is formed of former London Underground D-Stock vehicles: DMA 7058, DMB 7511 and Trailer 17128.