Garnett report advises trams for the Isle of Wight 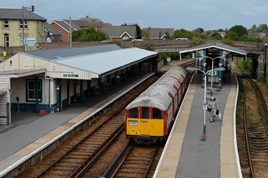 Trams could replace trains on the Isle of Wight to reduce operating costs, according to a new study. They would take over from former London Underground stock that was built in 1938.

The study also concludes that services on the 8.5-mile route between Shanklin and Ryde Pier would be better served as a micro-franchise, instead of forming part of the next South West Trains franchise.

The work was carried out by former GNER Chief Executive Christopher Garnett on behalf of the Isle of Wight Council. Its objective is to inform the Department for Transport’s specification for a new SWT franchise, to start in July 2017. It was announced on February 4 that two operators - Stagecoach and FirstGroup - would be invited to compete for the new contract.

Transport Minister Claire Perry said that while there was no desire to close the line, a more cost-effective and self-sustaining solution would need to be found. Her statement added: “This could include… setting up a social enterprise to take over the running of the line.”

It is understood that the Island Line generates around £1 million a year in fares, but costs £4.5m to run.

First of five Class 484s delivered to Isle of Wight