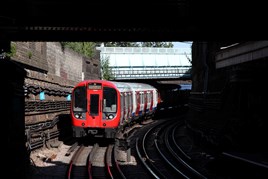 Transport for London says London Underground has reached targets of 30% reduction in delays, set out by the city’s Mayor Boris Johnson five years ago.

TfL says that delays on the Tube are at their lowest ever levels with a 38% reduction since 2011, when there were 29 million lost customer hours compared with last year’s 18 million (exclusive of industrial action).

It says this is down to “a far-reaching programme to deliver this improvement”, and highlights “the sustained investment in modernisation of Tube signalling, track and trains”.

Reliability figures show that the Victoria Line has improved 74%, the Jubilee Line is up 67%, and the Northern Line is now 40% more reliable.

Predictive infrastructure maintenance, working with the British Transport Police to improve incident response, having engineering and operations staff in one control centre to speed up incident recovery times, and the installation of covers on train passenger alarms (thereby reducing the number of accidental activations) are also highlighted as reasons for the reliability increase.

“I am delighted that we have delivered such a step-change in performance, and thanks must go to the thousands of staff who have helped to make better performance a reality for millions of Tube users every day.

“We can be rightly proud of the progress we have made in the last few years, especially considering the record numbers of passengers using the network.”

LU Managing Director Nick Brown said: “We have relentlessly driven down delays so that our customers can get to where they need to go with minimum disruption.”

"Our budget, to be frank, is in tatters," says Commissioner Andy Byford as current Government funding package for TfL set to run out within days

@Staplefordtrain How have I never heard of this before? All else aside that demo is perfect for tv - you’d have tho… https://t.co/VrBJxTNJhs