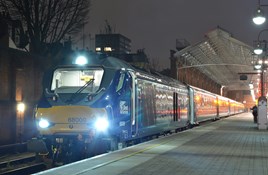 The time taken to satisfy the requirements of the Transport and Works Act Order with regard to noise and vibration, particularly in the Wolvercote area of Oxford, is the principal reason why Chiltern Railways has had to delay the introduction of its service from Oxford through to London Marylebone. The first service will leave Oxford station at 0536 on December 12 2016.

Chiltern began operating a half-hourly service from the new station at Oxford Parkway to Marylebone on October 26 2015 (RAIL 787).

However, securing the necessary permissions to rebuild the line between Oxford and Oxford Parkway has proved particularly lengthy and problematic. Local residents have protested against the proposals, citing the noise and vibration that will be created by the increased volume of rail traffic passing close to certain homes (RAIL 784). As well as Chiltern’s trains, in the 2020s the line will also be used by East West Rail services heading for Milton Keynes, Bedford and beyond.

Last autumn, both Chiltern Railways and Network Rail were confident that with these permissions secured, the new service would start “in spring 2016”.

“We have been accused at the NIC of wanting to cancel the eastern leg of HS2. That is not what we said and certainly not what we meant" - NIC Commissioner