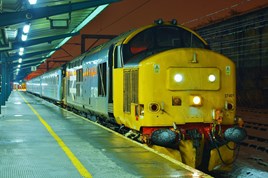 A third locomotive-hauled rake of coaching stock will be provided by Direct Rail Services to support Northern Rail’s trains on the Cumbrian Coast. There is no date for when the third rake will be delivered.

DRS locomotive-hauled coaching stock sets were introduced last May, but there have been several failures, both with the locomotives and with the carriages.