Dover-Folkestone closed for up to two months 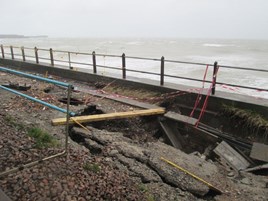 The railway between Dover Priory and Folkestone Central in Kent is currently closed following severe damage to a sea wall at Dover.

High tides damaged the sea wall that supports the railway near Dover Harbour and cracks on the wall were discovered on Christmas Eve (December 24).

Since then, the wall has deteriorated further with severe damage to a number of sections and there are a number of sink holes two or three metres deep along the length of the wall.

Major work will need to be carried out to repair the track and the sea wall will also need to be rebuilt. Engineers are on site carrying out a full assessment of the damage – only once this is complete can an estimate be made about when the railway will reopen. NR told RAIL on December 29 that it could be closed for "up to two months."

A bus replacement service will run the one stop between Dover Priory and Folkestone Central and will remain so while repairs to the line take place.

Some Southeastern high speed trains will be diverted to run between Ashford International and Ramsgate via Canterbury West and passengers travelling between Dover and London will be able to use trains to London Victoria via Canterbury East. In addition, a service will run each day between Dover Priory and Ramsgate calling at all stations - Martin Mill, Deal, Walmer and Sandwich.

A Network Rail spokesperson said: “We know how important the railway is for people in this area and our Orange Army is working round the clock to establish what action needs to be taken, though we know the damage to the sea wall supporting the railway is severe.

“Teams of engineers are on site and we will do everything we can to reopen this stretch of railway as quickly as possible.

“In the meantime, passengers should check with National Rail Enquiries or Southeastern for the latest information before travelling.”