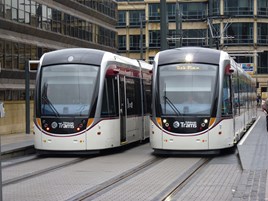 More than five million passengers will have used Edinburgh’s tram network in 2015, according to projected figures released by operator Transport for Edinburgh (TfE) on December 21, just before this issue of RAIL went to press.

2015 was the first full year of operation, with trams having started passenger traffic on May 31 2014. And the figures show patronage up 12% compared with the same period last year, with TfE claiming the service is outperforming the projected targets set in the business model.

Lesley Hinds, chairman of Transport for Edinburgh, said: “These latest figures demonstrate the continuing popularity of Edinburgh Trams, and add to the success of our first year of operations. We now want to build on this success for the future of the service, as we look to extend and develop the network to provide for even more people in Edinburgh.”