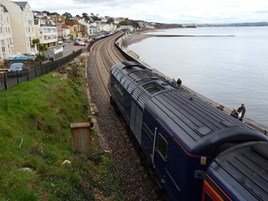 Rail services on the Dawlish to Teignmouth section of the main line through Devon could be disrupted for more than 10% of each year by 2040 and for almost a third by 2100, according to a new study focusing on the effect of sea level rises.

Although the study focuses on the vulnerable stretch of line in Devon, which closed for two months in early 2014 following a series of coastal storms, authors David Dawson, Jon Shaw and W. Roland Gehrels argue that there could be similar implications for other routes in Wales, southeast England, the Cumbrian Coast and Scotland.

It shows that since completion of the Great Western Railway in 1846, sea levels have risen by 20cm in the English Channel, and that most of that has occurred in the past 40 years with a direct correlation between recent sea level rises and disruptions to the railway.