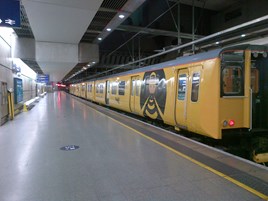 The tests (on the weekends of October 18/19 and November ½) used Beacon Rail 313121 to test onboard and lineside ETCS equipment between Elephant and Castle and Kentish Town, under possession. The signalling was controlled from Three Bridges.

Siemens is supplying the ETCS equipment for infrastructure and trains - in the central section of Thameslink it will allow 24 trains per hour in each direction to run using Automatic Train Operation, a world first.

The Class 313 is used by Network Rail to test different suppliers’ ETCS equipment near Walton-at-Stone, to ensure the interoperability works as promised. More intensive testing of ETCS will now take place, with a Siemens Class 700 electric multiple unit expected to run under ETCS between Blackfriars and St Pancras International in late summer 2016.

Thameslink Programme Project Director Paul Bates said: “These test runs were an important step for the Thameslink Programme, and the culmination of six years of work at our test facilities in Hitchin and in our lab at Southwark. It was a credit to everyone who has worked on this project that the equipment worked first time, even on the technically-demanding switchover from traditional signalling to ETCS at Elephant and Castle.”