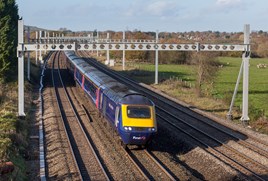 The train operator’s plans are in shreds. Its franchise agreement with the Department for Transport will have to be substantially amended. And NR’s revised schedule for wiring the Great Western Main Line means many of GWR’s promises for capacity and performance improvements cannot be met on time. In some cases, they cannot be met for years.

Hopwood must work out how much of his three-year programme is still possible. The first of 58 suburban electric trains arrives early next year, but there is no possibility of the wires being ready for them to run as planned.

Beyond that, a key decision will be to convert the entire order for electric inter-city Hitachi trains into bi-mode variants, fitted with diesel engines.

“The core main line out of Paddington will be electrified first, and that does give us the ability to use quite a lot of the EMUs . We will get to Didcot first, and we will need to make sure we have train patterns that make use of that,” said Hopwood.

“We get our first EMUs in the early months of 2016. We already have wires to Hayes in west London, and we intend to start using them within a few weeks of receiving those trains.

“The dates Network Rail has published are back-stop dates. It is saying to us that it will try to outperform those dates. So we expect to see electrification to Maidenhead in early 2017, and that gives us our next opportunity to use EMUs.”