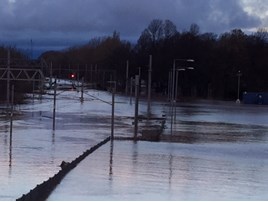 The West Coast Main Line north of Carlisle will be closed for several days after eight feet of water flooded the railway.

The depth of the water, around two miles north of Carlisle station, has reached its peak but is not expected to clear until Tuesday (December 8).

Network Rail said a full assessment of the damage will take place as soon as the water recedes and everything done to reopen the railway as quickly as possible. A number of safety-critical cabinets, which house complex electrical equipment, are currently submerged and will have to rebuilt once it is safe to do so.

NR used a helicopter to inspect the railway north of Carlisle looking for further damage caused by flooding and high winds. NR’s 'Orange Army' on the ground has been working 24 hours a day to clear trees, landslips and repair flood damage to keep as much as possible of the railway open.

Martin Frobisher, Network Rail's route managing director, said: "The unprecedented amount of rainfall and high winds have taken a significant toll on the railway and we are working round the clock to keep as much of the network open and repair the damage that has been caused.

"North of Carlisle station we have to wait for eight feet of water to recede before we can carry out extensive safety checks and repairs – including rebuilding a host of complex electrical and signalling equipment which is currently underwater. This, coupled with dozens of other sites which have been flooded or damaged, means we have a lot of work to do to ensure the railway is safe and able to be used."