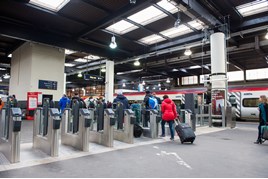 Rail fares will rise, on average, 1.1% from January 2 2016, the Rail Delivery Group confirmed this morning (December 4).

“We know that nobody likes to pay more to travel by train, especially to get to work, and at 1.1% this is the smallest average increase in fares for six years,” said RDG Chief Executive Paul Plummer.

“On average 97p in every pound from fares is spent on trains, staff and other running costs. With passenger numbers doubling in the last 20 years, money from fares now almost covers the railway’s day-to-day operating costs.

“This allows government to focus its funding on building a bigger, better network, when the railway is becoming increasingly important at driving economic growth, underpinning jobs, and connecting friends and families.

“As an industry, we are working closer together to deliver better stations, more trains and improved services, and to get more out of every pound we spend.”

The RDG, which represents train operators and Network Rail, says that 47% of all passenger revenue in 2013-2014 came from discounted tickets.

Rail Minister Claire Perry said: “We are helping hardworking people with the cost of transport. We’ve put a stop to inflation-busting increases in regulated fares until 2020. This will save the average season ticket holder £425 in this Parliament, and means earnings are outstripping rail fare increases for the first time in a decade.

“Our plan for passengers is improving journeys for everyone - it’s transforming the tickets people buy, how much they pay for them, the trains they sit on, how quickly they arrive, and the stations they arrive in.”

Labour’s Shadow Transport Secretary Lilian Greenwood said: “The Christmas cheer will end early for thousands of commuters when they return to work on January 4.

“Commuters were always told that higher fares would fund investment, but vital projects have been delayed for years and passengers are paying ever more to travel on increasingly overcrowded and unreliable trains. It’s clear that the railways are in urgent need of reform.”