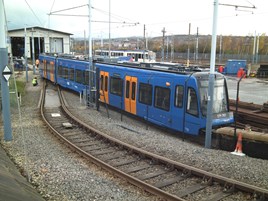 The UK’s tram-train trial project moved a step forward on December 1, with the unloading of the first of seven Vossloh Class 399 vehicles at Stagecoach Supertram’s Nunnery Depot in Sheffield.

Numbered 399201, the Vossloh-built train is slowly manoeuvred within the depot confines by out of sight Tram 105.

Light rail ‘vital’ but stable policies would give ‘greater confidence’

Light rail “plays a vital role” in supporting the shift from cars to public transport, and the case for it is “stronger than ever”, according to a new report.