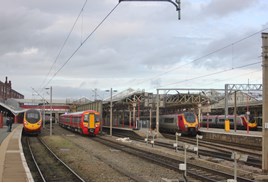 The section of High Speed 2 from Fradley in the West Midlands to Crewe will open six years earlier than planned - in 2027 - following a final decision on the route by Secretary of State for Transport Patrick McLoughlin on November 30. A Hybrid Bill for the section, known as Phase 2a, will be deposited in 2017 with Royal Assent sought in 2019.

The decision follows an assessment that claims journey time savings from London to Crewe are estimated at 13 minutes to 55 minutes with the construction of Phase 2a. This is in addition to the reduction in journey times from the present 90 minutes to 68 minutes offered by Phase 1 from London to the West Midlands.

Phase 2a would also ease pressure at Colwich Junction and Stafford, and the Department for Transport (DfT) claims that building it earlier “more than covers the costs of acceleration through additional revenue and inflation savings, compared with construction in 2033 as originally planned”.

The Benefit:Cost Ratio (BCR) of Phase 2a is said to be 1.3:1, and the DfT says it will offer “further efficiency savings for the Government and a smoother work profile for the supply chain by continuing construction from Phase 1”.

McLoughlin is seeking construction powers through a separate hybrid bill, and other options for Phase 2, which links Phase 1 to Manchester and Leeds, could also be accelerated. “If, in the future, we identify ways that we can accelerate construction of other sections of the route, then we will,” the Government says in High Speed Two: East and West, the next steps to Crewe and Beyond.