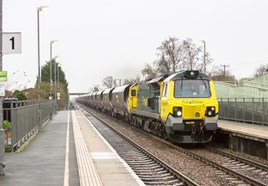 The amount of freight lifted on the railways in the second quarter of 2015-2016 was down 18.4%, compared with the corresponding period last year.

Office of Rail and Road (ORR) statistics released on November 25 show that 21.1 million tonnes were lifted in the three-month period. This is the second lowest Q2 and third lowest quarter overall since the start of records in 1996-1997.

Overall, freight moved 4.4 billion kilometres in 2015-2016 Q2, representing a 16.5% fall compared with the same quarter last year. This is the lowest Q2 since the start of the quarterly series and the fifth lowest total in any quarter since records began in 1998-1999 Q1.