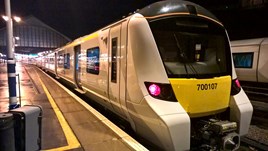 Built by Siemens in Krefeld, Germany, the ‘700/1’ is the first of the 115-strong train order to be delivered. The electric multiple units are destined for Thameslink services.

It departed Three Bridges at 2244 and completed a series of running braking tests at 40mph, 60mph and 80mph. It arrived at Brighton at 2307, departing at 2332 and arriving back in the main facility at Three Bridges at 0100 on November 25.

With this initial test complete, Govia Thameslink Railway said that the 240-metre train, which is half as long again as most Thameslink trains operating today, passed the initial tests that proved its compatibility with signalling. It will not be used for night-time testing.

GTR, which will operate the Class 700s, said it was a ‘soft entry’ for the train. The next stage will be to take another train out with instrumentation to test other parts of the train.