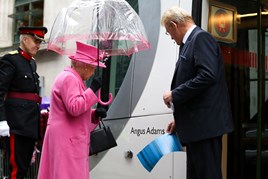 Her Majesty The Queen named a Midland Metro tram during a visit to Birmingham on November 19.

Accompanied by the Duke of Edinburgh, HM The Queen visited the new Bull Street stop in the city centre. And she named Tram 35 Angus Adams, after the former chairman of Centro who was a key figure behind the £128 million Midland Metro extension from Snow Hill to New Street that is nearly complete. He died in 2012.

The Queen then toured the tram, one of 25 Urbos 3 trams built in Spain by Construcciones y Auxiliar de Ferrocarriles (CAF) and bought for £40 million.

Centro Chief Executive Geoff Inskip, speaking on the day, said: “We have secured further funding which will see £1.2 billion invested in the Midland Metro network over the next ten years. Important new links in Wolverhampton, to Edgbaston, and to Brierley Hill will be enhanced with passengers being able to get straight to our High Speed 2 rail stations at Curzon Street and the NEC/Airport by 2026.”