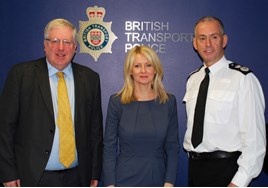 Esther McVey is the new chairman of the British Transport Police Authority. She was appointed by Secretary of State for Transport Patrick McLoughlin following an independent selection process, and will serve a four-year term.

McVey’s role will be vital in setting the strategic direction of the BTPA, to ensure the British Transport Police remains efficient and effective while delivering value for money.

McVey began her new duty on November 19. She will continue to work with the BTP to oversee transport security and tackle the issue of sexual violence on the rail network.