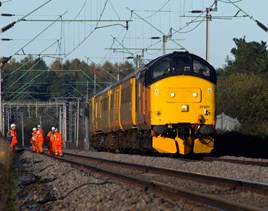 In particular, it points to “staggering and unacceptable” cost increases in the project to electrify the Great Western Main Line from London to Cardiff, which is now expected to cost up to £1.2 billion more than the £1.6bn estimated a year ago (RAIL 786).

PAC also said there is still “far too much uncertainty” on costs and eventual delivery dates for the electrification of both the trans-Pennine route and the Midland Main Line - and warned more projects could be delayed in order to balance Network Rail’s budget.

In light of its findings, the Committee has called for a fundamental review of the regulator’s role and effectiveness in planning rail infrastructure.

MPs urged the Government to publish a revised and re-costed programme of electrification improvements, including the rationale for prioritising different schemes, following the review by Network Rail Chairman Sir Peter Hendy that is due imminently.

PAC Chairman Meg Hillier said today (November 20): “Network Rail has lost its grip on managing large infrastructure projects. The result is a two-fold blow to taxpayers: delays in the delivery of promised improvements, and a vastly bigger bill for delivering them.

“The potential near-doubling in cost of the electrification of the Great Western line is a symptom of seriously flawed control and planning. Another is the continuing uncertainty over electrification of both the trans-Pennine route and the Midland Main Line.

“The Government has identified rail infrastructure as a vital part of its economic plans - for example, in establishing what it describes as a ‘Northern Powerhouse’. It is alarming that, in planning work intended to support these plans, its judgement should be so flawed.

“Our inquiry has found that the agreed work could never have been delivered within the agreed budget and timeframe. Yet Network Rail, the Department for Transport and the regulator - the Office of Rail and Road - signed up to the plans anyway.

“Passengers and the public are paying a heavy price, and we must question whether the ORR is fit for purpose.”

Based on government requirements for the rail network, Network Rail sets out the work it will carry out in five-yearly cycles. The Office of Rail and Road reviews these five-year programmes, including the expected costs.

In October 2013 the Department for Transport, NR and the ORR agreed a £38.3bn rail spending programme covering the period from April 2014 to March 2019.