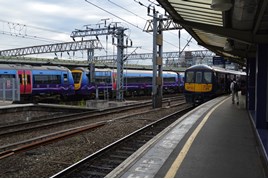 Rail North’s starting point for HS2 will be the new Northern Rail and TransPennine franchises, Director David Hoggarth said at the National Rail Conference on November 5.

“It goes significantly beyond there as well,” he added. “Within the strategy, again trying to keep things simple, we have four key elements - the four ‘Cs’.

“Connectivity. Links between some of the Northern cities are really poor. Try travelling by train from Sheffield to Bradford - the sort of places that are just not well linked up at all. We had some work done called the Yorkshire Rail Network Potential for Improving the Rail Network for the whole of the North, and identifying that you can generate up to £12 billion of benefits just by improvements in terms of frequency from the main centres. That’s a massive benefit that probably wouldn’t be captured at additional cost for another piece of work.

“Capacity. TransPennine appeared twice in the top ten most crowded trains last year. Thankfully, after that survey, there were electric trains on some of those services, so hopefully it won’t appear there again. There are some very crowded trains in the North. You can see the growth even in the last year on those services.

“Coherence. I call this just being a bit more like London actually - that we can draw on a map that people understand, and is easy to use. We’re a long way from that in the North at the moment, and that’s where we want to get to. A simple first structure is part of that.

“Cost-effectiveness. Currently Northern and TransPennine together are about 50% of the subsidy in terms of their finances. That needs to come down - we need to set out ideas in the long term of how we can do that. One of the key things we have achieved with the partnership deal onto the DfT is the ability to retain savings that we make on that, and (of course) the investment on the franchise, which is just something that hasn’t happened and we need to come back to.”

New fibre optic equipment being tested for HS2 is intended to make sure that sinkholes never become a major problem on Britain’s railways.