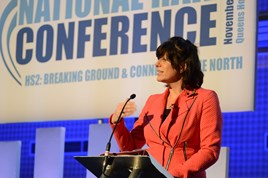 “People are starting to think about this as the railway for the future. We love our steam trains, we love to talk about our history, but it’s actually the transport system for the 21st century.

“It’s clean, it’s vast, it’s convenient, it’s right into the city centre where you want to be, and crucially it’s a great system in a very crowded island. Particularly for journeys around the South East it is becoming really the only way to travel.

“A railway is not just the improvements in seats, faster trains and better connections, I think it’s a growing awareness that we can build a world-class, state-of-the-art railway that really binds the country together. One of the most important things about HS2 to me that it truly does deliver that one-nation vision that we want.”