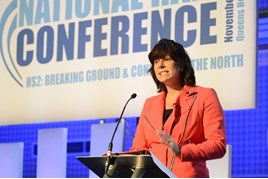 The lack of connectivity between the east and west of Britain still concerns Rail Minister Claire Perry, but she says that HS2 will help.

Speaking at the National Rail Conference on November 5, she said: “I remain gobsmacked by how slow some of the links east-west can be - between Newcastle and Carlisle, for example, cities that are ripe for an investment in railway. But HS2 really starts to pull that economic activity right across the country.

Work on Northern Powerhouse Rail could start in mid-2020s