Getting the supply chain right is the key to success 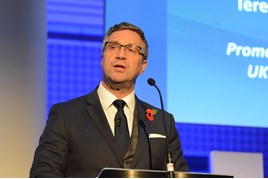 “Britain’s coming major projects will make a difference, and will do much, much more than projects over the past two decades in redeveloping our industry.”

That was the view of Terence Watson, Alstom Country President and Transport Managing Director, and co-chairman of the Rail Supply Group. He told National Rail Conference delegates on November 5 that there are always two world views of the industry: “The first is cynical. It’s that we’re rubbish, we’re always late, it’s broken, there’s no possibility of us leading the world in anything. Frankly, don’t get out of bed and try.

“The second is ambitious - it recognises the UK’s historic leadership. It’s from the Victorians onwards, and the opportunity that we have coming, certainly in the next decade or two.”

Watson said he believes in the second view, and that the industry does too.

Speaking from the RSG viewpoint, Watson said of the upcoming projects: “Our aim is to take a positive collective action based on the views of the industry. And it takes into account two things: one, that there is significant growth around; and two, that these projects are really once-in-a-lifetime opportunities that we cannot just see as projects."