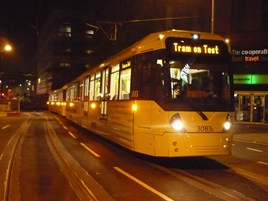 The first Metrolink trams ran into Manchester’s Exchange Square in the early hours of November 1.

Trams ran from Victoria station to the new stop, which is due to open before Christmas and which forms part of the Second City Crossing that will open completely in 2017.

“In the coming weeks trams on test will become a regular sight in this area of town, which is an exciting phase of the project and a major step forward for the Second City Crossing,” said Transport for Greater Manchester’s Metrolink Director Peter Cushing.