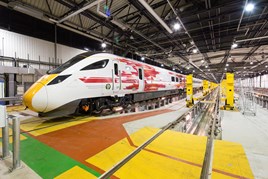 Five-car 800002 has arrived at North Pole depot in West London.

Hitachi Rail Europe will operate the depot, which was last used by Eurostar in 2007, to maintain Intercity Express Programme trains used by Great Western Railway. It is planned that the '800s' will be introduced from 2017.
GB Railfreight 66751 hauled the '800' from Asfordby, where it had been undergoing testing, to the depot.