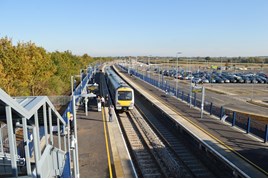 CR Managing Director Rob Brighouse said: “This is an historic day. Our significant and unique investment will be economically advantageous for the regional economy creating competition in the rail market between Oxford and London, as well as delivering the first new service between a major British city and London for over 100 years.”

CR is providing £130m of funding, with repayments beginning today. Network Rail is spending a further £190m on the scheme, which also forms part of the East West railway. For that reason it has been rebuilt to W12 gauge and features infrastructure ready for the installation of overhead line electrification, although no date has been set for that.

NR Chief Executive Mark Carne said: “By working closely with Chiltern Railways on this part of our Railway Upgrade Plan we have been able to deliver precisely what its customers want - a much-needed new transport option for Oxford-based business and leisure travellers to London.