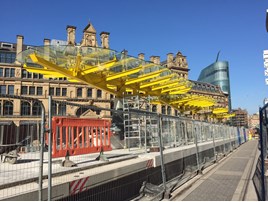 City centre residents and businesses are being given safety messages about work to energise and commission the overhead line equipment from Manchester Victoria Station along Corporation Street to the new stop in Exchange Square and through to Market Street/St Mary’s Gate.

The overhead lines – which carry a direct current of 750 volts and are over five metres above the ground – will power trams along the first phase of the Metrolink Second City Crossing to Exchange Square and should now be treated as “live” at all times, even though trams are not yet running.

Transport for Greater Manchester (TfGM) announced said the new station will open in the run up to Christmas.