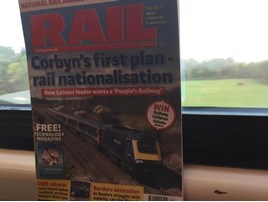 Within two hours, the post had been retweeted more than 250 times and favourited by more than 410 people.

The post received several comments from other tweeters, including:

The tweet was picked up by i100 (from The Independent), which said: “Jeremy Corbyn is on the front page of RAIL magazine and he couldn’t be happier.”