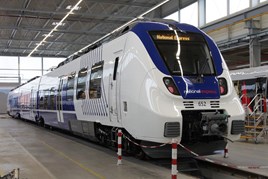 Local transport authorities in Germany’s North Rhine-Westphalia region have awarded National Express Group a further two rail contracts, in addition to the two contracts that NX will begin operating in the area in December.

The new contracts are for two of the three Rhine-Ruhr Express (RRX) services serving Cologne, Dusseldorf and Dortmund, in Germany’s most populous region. The NX trains will carry approximately 30 million passengers a year.

The first of the contracts starts in December 2018 and the second in December 2020. Both will run until December 2033. Together these two new contracts are expected to generate revenues of around EUR1 billion over their lifetimes.

NXG Chief Executive Dean Finch said: “National Express is delighted with this further success in German rail. It strengthens our presence in the North Rhine-Westphalia region, where we begin operating our first contracts later this year.

Finch added: “I am very pleased with the progress that our strong local team is making. They are focused on delivering rigorous proposals that will provide excellent services for passengers, a fair deal for local taxpayers and good returns for shareholders. We look forward to providing passengers in the North Rhine-Westphalia region with a high quality rail service for many years to come.”