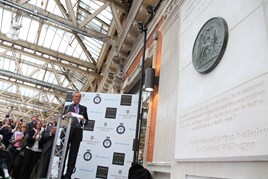 The Duke of Wellington has unveiled a new memorial at Waterloo Station to honour the 24,000 soldiers of the Anglo-Allied and Prussian forces who were injured, died or went missing on the Battle of Waterloo two centuries ago. The memorial was first revealed at a ceremony at the station on June 10.

"My heart is broken by the terrible loss I have sustained in my old friends and companions and my poor soldiers. Believe me, nothing except a battle lost can be half so melancholy as a battle won."

The Duke of Wellington said, “It is an honour to unveil the Waterloo Memorial in tribute to the thousands of men from many nations who fought and died in just a few hours two hundred years ago.

“It is important that the sacrifice they made, which led to a century of peace across Europe, should never be forgotten.”

South West Trains-Network Rail Alliance Chief Executive Tim Shoveller said, “We are both honoured and privileged to have played our part in the creation of a memorial at London Waterloo station. It is a fitting place for this stunning tribute to the men who died at the Battle of Waterloo; it will be seen by the millions who frequent the UK's busiest railway station for years to come.”