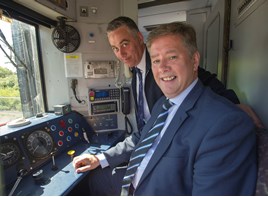 Regular trains have once again been observed on the Borders Railway after a gap of over 45 years – as part of preparations that are well under way for the introduction of passenger services between Tweedbank and Edinburgh Waverley on September 6.

ScotRail began driver and conductor training on the new line in the week commencing June 8. To mark the occasion, Scottish Cabinet Secretary for Infrastructure, Investment and Cities Keith Brown visited the trainees in the nearly completed Tweedbank station.

An average of four return journeys will be made each day between Tweedbank and Newcraighall, with drivers reaching speeds of up to 90mph. A total of 64 drivers and 64 conductors are set to be trained on the route, as part of a schedule lasting 12 weeks.