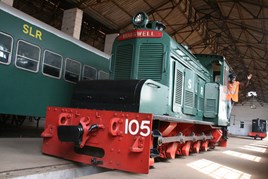 A pioneering project that is helping to kick start aid and investment to Sierra Leone, one of the world’s poorest countries, is being highlighted at Leeds Industrial Museum at Armley Mills this weekend.

The partnership with the Sierra Leone National Railway Museum at the event will show how long-forgotten rolling stock was rediscovered in locked up sheds in Freetown – including Queen Elizabeth II’s forgotten royal train.

From West Riding to West Africa will take place over the Spring Bank Holiday May 23-25 to tell the story of how locomotives built in Britain were shipped out to Sierra Leone over the past century, how they were rediscovered, and how they are helping the West African country to recover from the Ebola crisis, as well as years of civil war.

This weekend marks the centenary of the oldest surviving locomotive (known to Freetown children as Nellie the Engine), as well as the 40th anniversary of the railway closing and the launch of a UK support group, the Friends of the Sierra Leone National Railway Museum.

The British-built 350 mile-long narrow gauge railway in Sierra Leone was forced to close in 1975. The impact of the railway’s loss was immediate: thousands of farmers who had transported fresh produce in a few hours from the plains to the coast and capital now took days to go by dusty track. Farms closed; communication between friends and families suffered. Familiar-sounding stations to British ears shut, such as Hastings, Waterloo and Bradford shut – as did every station, from Freetown to Pendembu and Kamabai.

After closure, railway staff secretly hid and locked their favourite locomotives and carriages away from potential scrapping in sheds at the Freetown docks. During the civil war of 1992-2002, more than 10,000 refugees sought refuge from child soldiers inside the rusting rolling stock - including the forgotten royal train.

After the war ended, rumours of their survival persisted and they were rediscovered by a British army officer, Colonel Steve Davies, and alongside Sierra Leone’s President, snatched from Chinese scrap men at the eleventh hour following a staged intervention on live TV.

Through ten years of peace and the Ebola outbreak, the trains have been cosmetically restored as the Sierra Leone National Railway Museum. Those locomotives from have become beacons of hope and are seen as a way to bring in foreign tourists and international knowledge and training to empower staff and a nascent cultural sector. For the first time, young people will be able to train with hands-on engineering apprenticeships. The potential for this museum as a cultural, heritage and educational hub is only just being realised.

In the week that Air France restarted flights to Freetown, the government has cautiously started to look towards a post-Ebola future.

An ambitious group comprising Sierra Leonean civil service staff in Freetown plus railway enthusiasts and museum professionals in York have revealed plans to make the SLNRM's rolling stock become vehicles for aid, UK investment, sponsorship, education, job creation and skills transfer – which will eventually get tourists to once again spend time and money in the country.

Friends of the Sierra Leone National Railway Museum chairman Helen Ashby said: “Many years ago Nellie the Engine and her later cousins helped build a nation 3,000 miles away. Now, 100 years later, these products of Britain’s industrial past are engines for growth once again: they can help rebuild that nation and help people rebuild their lives. The museum creates a funding stream directly into the heart of a country where most people die before their 50th birthday."

“Never before has a heritage railway project had a chance to provide a humanitarian role on this scale, but now that time has come. The team in Freetown has a chance to empower their nation through cultural links, education, job creation and direct aid and investment. It’s an audacious project, but a sustainable one, and has formal support in both countries.

Ashby added: “But we need the people of Britain to kick start this project. I hope people will see how the workshops of Britain are set to change the world a second time around. Donations and sponsorship are what we need to stoke the fires of growth right now.”