The Campaign for Better Transport says that more focused efforts to switch freight off road and onto rail and waterways could cut Heavy Goods Vehicle traffic on the busiest roads by up to 21%, with congestion falling by up to 25% if rail and water freight increases by 50%.

Government figures that estimate a maximum reduction of around just 7% in road traffic as a result of such transfers are skewed, says the CBT.

It claims the estimates are based on national statistics that include light goods vehicles, whose loads tend to be less suitable for rail.

But by targeting the heaviest vehicles, longest journeys and busiest routes, total traffic flow could be cut by 10%, with up to a 40% reduction in the most congested areas.

The CBT is calling on the Government to develop a new freight strategy “recognising the significant role of mode transfer in reducing congestion on key parts of the strategic road network, and setting out a route map for rebalancing the freight transport market”.

While the CBT recognises the need for investment in alternatives to road (such as on the busy A14 corridor), it further says that HGVs should be charged on a system using weight, distance and vehicle quality, as in Switzerland and Germany. Such a move would make the relative costs of road and rail more transparent. 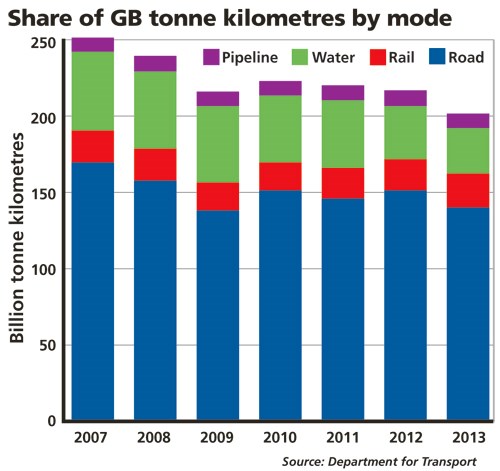 Furthermore, where HGVs constitute a particularly large proportion of traffic, the reduction in road tonne-kilometres could be as high as 75%, with a transfer to rail alone cutting overall congestion by up to 20%.

“While the Government is committed to investing significant funds in the railways and in rail freight in particular, it has underestimated the full extent to which this investment could reduce road congestion,” said CBT Freight on Rail Manager Philippa Edmunds.

“The Government should take account in its forecasting and modelling, and in its policy and spending, the potential to shift HGV traffic to rail and water and the congestion, safety and pollution benefits of doing so.”