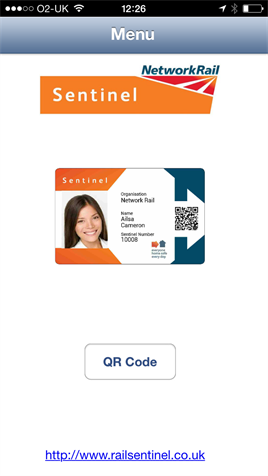 An agreement has been signed for Transport for London to adopt the Network Rail ‘Sentinel’ card system which improves workforce safety.

The card, which was introduced by NR in its current form in June 2013 has contributed to a 11% fall in workforce injuries and fatalities and uses smartcard and database technology to manage and maintain workers’ competence, medical records and authority to work. TfL began to replace its existing TfL LU LUCAS smartcards from April 1, although they will not be replaced until they expire.

There are currently 96,000 active Sentinel cardholders; the collaboration with TfL extends access to over 33,000 additional rail workers, which will increase over time as other parts of TfL adopt the smartcard.

The Sentinel service operates through an easy-to-navigate mobile app that is available on all smart phone devices. A built-in QR code scanner records the data of registered users from their cards at the point of entering a worksite.

Network Rail Head of Professional Development and Training Guy Wilmshurst-Smith said: “TfL’s use of Sentinel represents a significant milestone; not only will the two largest operators of the rail infrastructure be able to use the same system but Sentinel will also provide the opportunity to share data on double-shifting, fatigue management and competence restrictions.”

TfL Programme Director of Infrastructure George McInulty added: “We often use the same suppliers as Network Rail so it is sensible and safer to have the same processes and standards wherever we can, so they don’t have to switch between the two. Joining Network Rail in the use of the Sentinel ID card is a fantastic example of where we can come together to make our industry a safer and more joined up place to be.”