Down Street ‘ghost’ Tube station to be leased 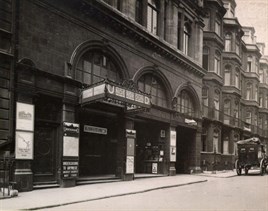 Historic disused London Underground station Down Street is to be transformed under a commercial lease.

Transport for London (TfL) is inviting businesses to submit innovative ideas to transform the station, as part of plans to generate £3.4 billion in non-fare revenue for the Underground network.

Down Street closed in May 1932 owing to low passenger usage, but was used during the Second World War as the protected underground headquarters for the Railway Executive Committee. It is believed that the station was used by Sir Winston Churchill and the War Cabinet while the Cabinet War Rooms were being prepared.

While the station is closed to the public, it is still in regular use as part of the day-to-day operation of the Tube, meaning that only part of the station will be leased. Around 400m2 is on offer for businesses “to create something exceptional and establish the next chapter in the station’s history”, says TfL.

“The combination of space, history and location makes this a unique opportunity,” said Director of Commercial Development Graeme Craig.

“We are looking for a partner with the imagination to see the potential here and the capability to deliver it.

“Adjoining parts of the station are still required for running the Tube, but we will work with interested parties to ensure the commercial and operational activities can happily co-exist.”