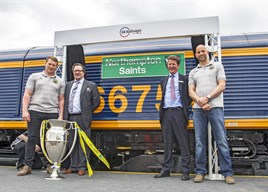 The naming was in association with GRS Roadstone and Northampton Saints, and celebrates the club’s most consistent run of success in over 60 years – they have reached nine cup finals in seven years and claimed the 2014 Aviva Premiership and European Challenge Cup titles.

The ceremony took place at the Wellingborough Railhead in Northampton, leased by GRS Roadstone, and near to Franklin’s Gardens (Northampton Saints’ ground).