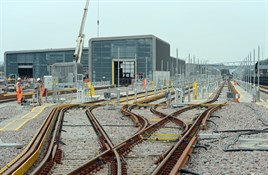 Power has been switched on in the Up side of Siemens’ new Three Bridges depot.

The depot straddles the Brighton Main Line. It has been constructed by Volker Fitzpatrick on former engineer’s sidings and is powered by third-rail.

The depot will be home to the Class 700 fleet that Govia Thameslink Railway (GTR) will begin using next February (RAIL 772), along with Hornsey depot, which opens in July 2016. Siemens has spent £300 million on the Class 700 depots.