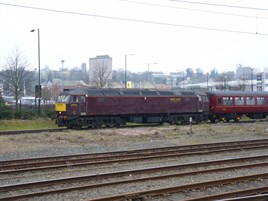 Network Rail has served West Coast Railways with a suspension notice effective from midnight on April 3.

It follows the Signal Passed at Danger (SPAD) on March 7, when a 100mph collision between a First Great Western High Speed Train and a steam excursion operated by WCR was missed by barely a minute. The SPAD ranked as the most serious this year.

This is an unprecedented suspension. Operators have been banned from certain routes, but this is the first total network ban since privatisation, indicating the gravity with which Network Rail is treating the incident.

West Coast Railways has been given until May 15 to take the required steps to remedy the “Event of Default” which has occurred because of a breach in Safety Obligations, or the likelihood that one will occur.

The suspension notice states: “Network Rail has had concerns about WCR’s performance of its Safety Obligations for some time, and recent events lead Network Rail to believe that the operations of WCR are a threat to the safe operation of the railway.”

NR says this specifically relates to:

If five of the seven required remedies are completed by May 15, with demonstrable progress towards completion of the other two, the suspension notice will be withdrawn. The required steps include introducing a risk-based driver monitoring regime, and demonstrating that there is an effective and secure system of tamper-evident seals for train protection isolator cocks on all relevant traction.

The suspension notice follows the incident currently being investigated by the Office of Rail and Road (ORR - formerly Office of Rail Regulation) and the Rail Accident Investigation Branch (RAIB).

On March 7, the 1635 West Coast Railways ‘Cathedrals Express’ (Bristol Temple Meads-Southend East) - formed of 34067 Tangmere, its Mk 2 support coach and 12 passenger vehicles (a mix of Mk 1/Mk 2 coaches) - passed signal SN45 at danger and overran by 700 yards. The signal is located at Wootton Bassett Junction on the Great Western Main Line. The incident occurred around one minute after a First Great Western service train cleared the junction.