FirstGroup bows out of ScotRail with message to passengers and staff 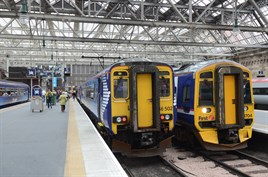 The operator of the ScotRail franchise since 2004 has thanked staff and passengers for their custom, before handing over to new franchisee Abellio on April 1.

FirstGroup Chief Executive Tim O’Toole said the company was “immensely proud to have operated Scotland’s railways for the past 11 years”. O’Toole highlighted some £82 million of investment, and an increase in passenger numbers of 34%.

“We will be handing over Scotland’s railways in a very strong position” said O’Toole. “Passenger numbers are at an all-time high, with more than 86 million passenger journeys being made in the last year, and satisfaction is at record levels of over 90% in the latest National Rail Passenger Survey - eight points higher than the national UK average, and six points higher than when we took over the franchise.”

Over the life of First ScotRail, O’Toole said that punctuality had risen from 84% in 2004 to a record high of 95% today.