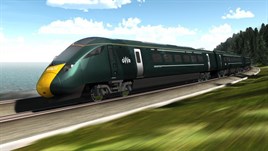 Around three million additional seats per year by 2018 will be introduced across the First Great Western franchise following the introduction of new trains, Secretary of State for Transport Patrick McLoughlin announced today (March 23).

The Government has reached an agreement with FirstGroup plc for First Great Western (FGW) to continue to operate trains until April 2019.

The deal includes the introduction of 369 AT300 vehicles from 2017 - they will be used on trains between London Paddington and Devon and Cornwall. Additionally, some 58 four-car electric multiple units will be introduced for the Thames Valley routes, and £50 million will be spent on improving passenger facilities.

“I am determined that passengers in the West, Thames Valley and South Wales get a railway that is fit for the 21st century,” said McLoughlin. “This is a fantastic deal which will give them more seats, more services and brand new fleets of modern trains.

FGW will pay the Government around £68 million to operate the franchise from September 2015 until April 2019.

It will be responsible for introducing Hitachi’s Intercity Express Programme trains into service between London, Bristol and South Wales and the Cotswolds from summer 2017. Government will also work with FGW to improve the performance and quality of the rolling stock serving the south west of England, particularly for inter-city services.