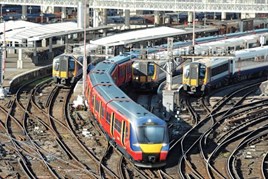 An agreement between the South West Trains-Network Rail Alliance and contractors has been reached for work to begin on major improvement works at London Waterloo, the UK’s busiest station.

A project to boost peak time capacity by 30% by 2018 will involve the extension of the existing platforms 1-4 and the re-opening of all five of the formerly mothballed Waterloo International platforms, supported by improved track and signalling. Temporary access has already been constructed to platforms 21-24 in the former International terminal.

The consortium, which includes Skanska, Colas Rail, AECOM and Mott MacDonald has been selected to carry out the work following a “detailed and stringent” procurement process. The consortium will now work with the Alliance to scope out plans to boost capacity at London Waterloo and other inner London stations. Detailed plans will then be submitted to the Office of Rail Regulation and Department for Transport for approval.

The lengthened and re-opened platforms will allow the operation of 10-car services, operated with both new and refurbished rolling stock. The Waterloo International platforms were last used in November 2007, when Eurostar services switched to St Pancras International.

Network Rail has introduced sniffer dogs to try to reduce the theft of signalling cables in the North West.