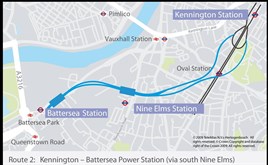 The contract to design, manufacture and deliver two Tunnel Boring Machines (TBM) for the Northern line extension to Battersea has been awarded to NFM Technologies, London Underground has announced.

The TBMs will be launched by the Ferrovial Agroman Laing O'Rourke (FLO) joint venture in the summer of 2016, with the extended line (on the Charing Cross branch) expected to open by 2020.

Each TBM will take seven months to tunnel between Battersea and Kennington. Both will have a cutting head just over six metres in diameter, with the full machine being 106 metres long.

Two new stations will be constructed – one at Battersea Power Station and another at Nine Elms - serving new developments such as the US Embassy, a redeveloped New Covent Garden Market and existing communities. The total cost of the Northern line extension is expected to be up to £1 billion, funded entirely through contributions from the developments in the area that will benefit from the extension.