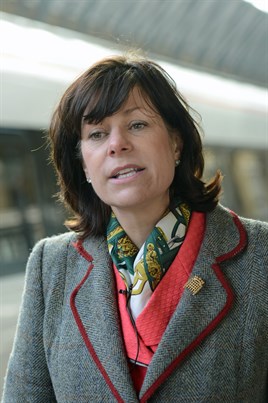 And thank you Peter Lavelle (Depot Manager Southampton Dock) for your kind introduction.

Before we head over to the quayside to see the train unloading from the ship, I would like to take this opportunity, on behalf of the government, to thank Hitachi Rail and Agility for all the work they have done.

And for getting the first train to the UK on time and on schedule.

Given Hitachi’s reputation for reliability, we expected nothing less!

Let me tell you why I’m so excited today.

First, because these superb new trains will be transformational for passengers on two of our busiest and most important rail routes to the north and the south west.

A smart and business-friendly environment in which people can work.

The trains have been designed to offer flexible and fantastic new catering facilities.

Every single pound of investment is going into improvements that passengers will be able to see and feel.

But these new trains are not just good news for passengers.

They are also fantastic news for Britain.

And that’s my second reason for celebrating today.

The benefits will be felt all over the country.

But particularly in the north east.

Where 730 new jobs are being created at the Newton Aycliffe factory over the next 5 years.

This region – of course – played a pioneering role in the development of the early rail network.

190 years ago, the Stockton to Darlington line was the world’s first public railway to use steam locomotives.

So the railway is coming home to Newton Aycliffe bringing back rail jobs to the north east.

And also building a new centre of rail excellence in the area.

Among the suppliers to IEP are Durham-based window company Romag.

And Newcastle-based Nomad Digital, which will provide on-board servers.

And many more jobs will be created across the country.

72% of the parts, systems and services that could have been sourced from the UK actually have been.

To give some examples.

Luccini, based in Manchester, is providing the wheel-sets.

And Knorr Bremse, a company based not far from my constituency in the south west, is supplying the braking systems for the IEP trains.

In fact I visited them recently.

All in all, this is worth billions to British businesses.

I know that many more IEP suppliers are here today - too many to mention – but I’d like to thank you for being part of the project.

Hitachi Rail has also moved its global HQ to London, which is yet another sign of confidence in our flourishing rail industry.

Which leads me to my third point.

The train arriving today is tangible evidence of our rail renaissance.

Of unprecedented investment in our railway.

After decades of neglect and underinvestment, we have got a huge programme of modernisation underway, the biggest for over a century.

That’s because rail is a vital part of the government’s long-term economic plan.

Growth cannot happen without investment in our infrastructure.

It’s why we’re spending £38 billion maintaining and improving the network between 2014 and 2019.

It’s why we’re investing in Crossrail, HS2, the Northern Hub and electrification.

And it’s why we are fully behind Hitachi as it embarks on this massive programme.

There are a few more essential thank yous.

Of course, thank you to Hitachi and Agility.

Thanks also to Wallenius Wilhelmsen for safely transporting the first train here.

Thanks to the Train Operating Companies for their support and input to the design.

And I would like to acknowledge the very many passenger groups and industry representatives here today who have also contributed to the IEP project.

I would also like to thank the Department for Transport and all the policy officials, some of whom are here today, for the tireless work they have done (and continue to do) in partnership with you all ensuring these exciting InterCity Express trains go into passenger service as planned on the Great Western and the East Coast main lines.

The only thing I find uninspiring about the train is that name – IEP.

I don’t know how you feel, but it doesn’t really capture the excitement or romance.

So can I challenge you to come up with a new name.

Something that reflects their sleek design.

How they’ll look speeding passengers across the country.

What they’ll do for the UK.

I may not be Rail Minister to decide on the best name…..

But I will always remember today.

The start of a new era for rail travel in the UK.