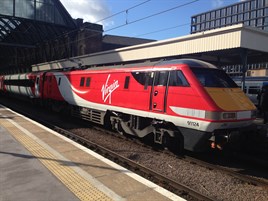 The first weekday of scheduled operation for the franchise was marked today (March 2) by the unveiling at King’s Cross of 91124 and a full set of Mk 4 coaches and Driving Van Trailer in a new vinyl-based livery. The train formed the 1100 King’s Cross-Edinburgh.

Inter City Railways, the company behind VTEC (a 90%/10% joint venture between Stagecoach and Virgin), is investing £21 million in the first two years of the franchise on improving the existing fleet. The work includes an initial deep clean, refurbished toilets, new carpets and seat covers, new on-train signage and external re-branding.

From 2018, 65 new Class 800/801 Hitachi Super Express trains will be introduced, replacing all but six of the Class 91/Mk 4 sets in the existing fleet. They will be used on services to existing East Coast Main Line destinations as well as Middlesbrough and Harrogate.

The East Coast services have been under the control of Department for Transport-owned Directly Operated Railways since the previous private franchise was handed back to government in November 2009.