Railway between Leamington Spa-Banbury to reopen by Easter 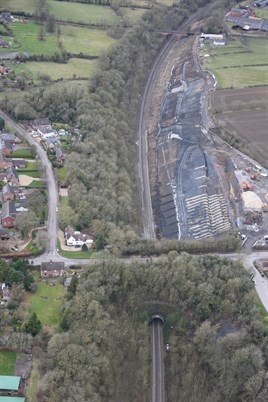 The railway between Leamington Spa and Banbury is to re-open by Easter (April 2), Network Rail has confirmed, after a 350,000 tonne landslip threatened to land on the track at Harbury.

The route forms part of the Chiltern Main Line between London Marylebone and Birmingham and has been closed since January 31. Since then, NR has been working to repair the landslip by removing over 100,000 tonnes of earth and has installed remote monitoring equipment to track the continuing movement of the landslip.

NR Chief Executive Mark Carne said that the organisation was “looking at what new engineering solutions are available to make it safer and less at risk to landslips in the future.”

Rail replacement bus services for Chiltern Railways, CrossCountry have been put in place, while Freightliner trains have been diverted via other routes.

The cutting is part of a Great Western Railway designed line originally built between 1847 and 1852, but which has frequently suffered subsidence problems. Unstable ground in the area meant that building a tunnel through the area where the cutting is was not a practical option at the time.