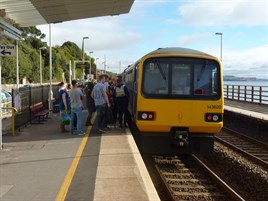 The Peninsula Rail Task Force has met with Department for Transport and Network Rail officials, ahead of a planned meeting with Secretary of State for Transport Patrick McLoughlin.

The meetings focused on proposals to make the rail network in the South West more resilient and reliable. They were held in the week that the region marked the first anniversary of being cut off from the rest of the UK when the Dawlish Sea Wall was breached on February 4 2014 (RAIL 742).

Signalling problems on the Exeter-Plymouth route the weekend after the meetings have illustrated the concerns.

Task Force Chairman Andrew Leadbetter said: “This weekend has seen further disruption and chaos for travellers - and has underlined our case perfectly. We need a far better rail service with resilience that can deal with these sorts of incidents.

“Our meeting last week was a good start. Initial discussions show that our plans align to those emerging from Network Rail in the Western Route Study, and it is clear there is shared ambition to see structured and long-term investment into the South West."